Manitoba Music‘s Challenge took place over four days and three nights (Aug 22-25, 2016) at idyllic lake-side cabins at Falcon Trails Resort, Falcon Lake, Manitoba. Six artists were placed alongside three mentors and tasked to come up with one song each day. The mentors, Dana “Rusty” Matyas, JP Hoe, and Alexa Dirks, were carefully selected to represent a diverse group of accomplished and prolific writers that could easily move between genres and styles.

Music Manitoba strove to create as much open space for creativity as possible. The calm setting with few distractions was very deliberate, making room for the muse to catch and give writers room to direct the event. They created groups of participants in a way to allow everyone to write with each mentor. There were three separate areas where mentors set-up their mobile writing and recording “studios” for the duration of the event (including a wide variety of instruments and percussion, microphones, and studio monitors). This meant that the creative process didn’t end with lyrics and arrangement, but could be extended into the production realm as well.

In addition to the scheduled writing/recording time, lunch hours were used to have round-table discussions around topics relevant to the songwriting process. Topics included co-writing tips, song registration, royalties, and best practices for demoing finished material.

“Of the nine in the group, four participants and one of the mentors have shown interest in using the songs in their own projects. The feedback was entirely positive. Some of the artists were entirely new to co-writing and others were veterans, but all of them were inspired to do much more of it after the retreat was finished. They found the connections they made at the retreat very valuable and many of them have indicated that they will continue to collaborate in the future. The actual songwriting and production skills gained from the workshop were invaluable to everyone involved.”
– Music Manitoba

“I had such a wonderful week at the Manitoba Music songwriting retreat. Working with peers of all different ages, levels of success, and genres was a humbling and extremely rewarding experience … It was truly inspiring, and after a long day of writing and recording, we found ourselves continuing to write new material late into the evening … During the week everyone seemed very open to being challenged, and writing outside of their comfort zones. This resulted in some very interesting, unique, and beautiful songs, as well as many friendships sure to last. I hope I can take part in something like this again!”
– Rusty Matyas (Weakerthans, Imaginary Cities), mentor

“The songwriting retreat was an incredible opportunity to connect with talented new members of our music community, and renew the focus on creating. We left with three beautiful songs, one of which, I may consider using for my own project.”
– JP Hoe, mentor

“The relationships I made and skills I gained at the songwriting retreat are invaluable. At the start of the retreat I didn’t have much co-writing experience. By the end of the retreat, I felt much more confident in my co-writing abilities. The retreat gave me a chance to connect with musicians who all have very different writing styles and experience with music. I learned so much from each individual and look forward to keeping up these relationships in Winnipeg. The retreat helped me broaden my writing style. Each song I wrote was extremely different from the last. I think this will help me create a more unique sound in my future writing. I felt extremely encouraged leaving the songwriting retreat. I learned so much, and came away with some great songs!”
– Katie MacDonald, participant 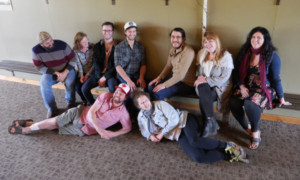